Hello! Yes I know I didn't blog in September. So sorry but I literally didn't have any time. I thought October was my window to relax but it's looking more like December  :( as I still have 2 books to publish by the end of the year. I. AM. EXHAUSTED. There is a never ending amount of stuff to do and unfortunately it's nothing I can pass on to others so I really have to suck it up and just get it done. Lord give me extra strength please.

I have been so stressed out for the past month and I'm so glad everything is starting to get back to normal. I  noticed that my tolerance for things was at a minus 1 and I just didn't care to talk. Every single little thing was irking me so much. I mean things still irk me but it's a lot better now. But I've been evaluating my boundaries. Boundaries is my biggest thing at the moment. I HATE when people email me, then WhatsApp me, then DM me the same conversation. Why??? Why do people do that? Especially when its work related. So now I've got a publishing assistant on Hashtag Press, I'm getting a new phone number because I feel like the world has my number.  I'm trying to say no more and just be more picky about what and who I give my time to because I think that's the only way I can stay balanced (or my version of balanced). 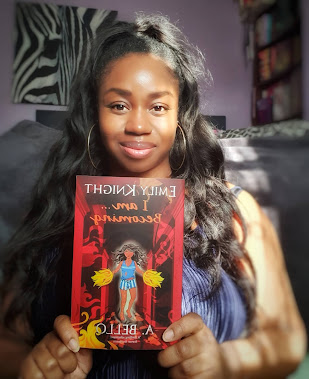 I have a third book!! Yay!!! Emily Knight I am...Becoming is out now and the reviews have been out of this world. Literally PR organised a blog tour for myself that was massive and every single one of them said such great thing about the book. I'm just so happy. All the late night writing till 3am and juggling this book with book 4 was a lot (I wouldn't recommend it) so when people love it, it just makes my heart full. The lovely Sophie Anderson, author of The House With Chicken Legs gave me a fab endorsement as well. This book has already brought me so many opportunities and it hasn't even been a month yet so I'm excited to see what happens next. My book launch was online, which to be honest I didn't want to do but I'm glad I did as it was so fun. Helen and her daughter Ellie hosted it and I just spent the hour laughing pretty much. It does suck that going into schools is pretty much a no but hopefully I'll be back in soon. It was pretty frustrating when my books took a week to get into the systems and then it disappeared of Gardners for a week due to an ISBN issue. BUT it's all resolved now so I can breathe.

My press for the book has been I think the best on yet. I got to do so many great interviews. Here's my latest one with The British Blacklist. They have supported me from book one and I appreciate them so much. 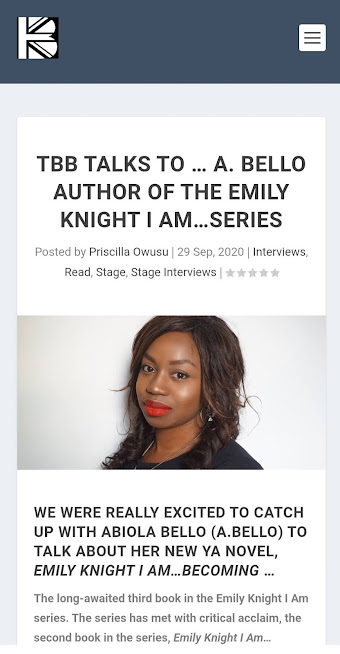 Speaking of book 4. IT'S DONE!!! I swear I don't feel like I've worked this hard on a book. Writing fantasy for me is so easy but this commercial YA—bloody hell. I sent it to my agent Gemma Cooper at The Bent Agency but then she said it was too long. Grrrrr! Never one to say no to a challenge I managed to get it down from 78K to 68K. Then just as I thought okay I am done, the teens tell me all the changes to GCSE. So you guessed it. I had to do one more edit but it's signed off now. God knows I deserve an amazing deal with all the effort I've put in.

My bookshelf with children's and YA books by Black authors is growing!! 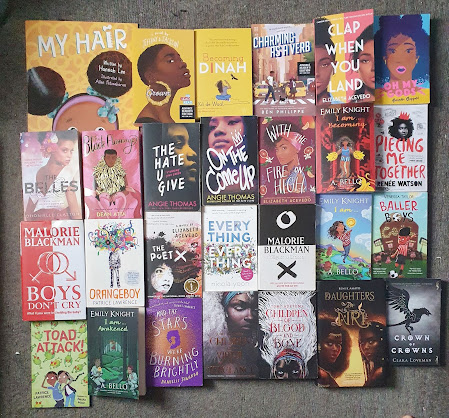 Guess what? I'm part of the World Book Day UK Advisory Group! I know right! Basically we were approached by them about The Diverse Book Awards and possibly doing something together (which we are) and then I was asked to join the group. We had our first meeting earlier this week and it was full of booksellers like Waterstones, book charities etc and I'm really all about pushing the diversity, getting more indie publishers involved and making World Book Day UK fun for teens.

The fact we had to move The Diverse Book Awards online was so jarring! Do you know how excited I was to throw that party? I had such a clear vision of it and how epic it was going to be. Moving it online is the only option during these circumstances but I refused to have it on Zoom. No thanks! We basically channeled The Emmys and pre-recording everything. It's sooooo good and it's live!  I won't spoil the winners for you, if you haven't seen yet but I am so proud of this first year and can't wait to do it all over again (with better planning)

The fact that we waited for so long and Breanna Taylor's murderers didn't even get charged! I just can't even comprehend how anyone can live with that decision. I pray for peace for her family. 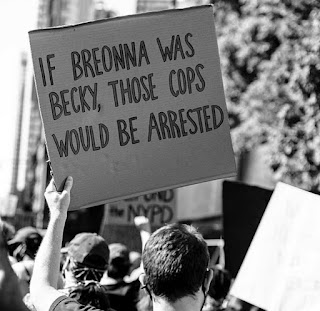 Helen has been telling me for ages to watch Sex Education on Netflix. I finally got round it to it and watched two seasons in a week. I love it! It's so hard to find shows that just grip you but if you haven't watched it, it's hilarious and I'm hoping season 3 comes soon. I told Helen to watch Power and now she's hooked. How good is Power Book 2?? The fact I'm rooting for Tariq is confusing me so much! I just started re-watching Gossip Girl and it reminds me of being 21, living in Catford. All we did was watch Gossip Girl, throw house parties and babied the cat.

I got a tweet a few weeks ago from Children In Read which raise money for Children In Need and they asked me if I could donate a signed copy of EK3. How cool? Help me to raise money by bidding https://www.jumblebee.co.uk/childreninread2020#buzz_expend_105363 and there are loads of books. JK Rowling just joined in as well.

Have you seen our Hashtag Black History Campaign?

Love Island USA is so much better than the UK one. It's the level of drama and Black Girl Magic that I have needed!!!!! How can America take a UK show, not even do it on an island but on a roof top in Vegas and still do it better! And a Black couple!!!! The UK could never! Justine dancing already won the show. 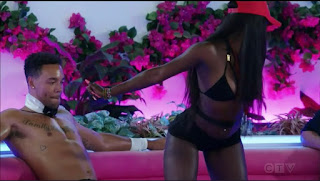 Trump. The fly. No free school dinners. Another lockdown in London. I have no words.

January 31, 2019
If you are reading this that means that you survived January! CONGRATULATIONS!!! Isn't it just the worst month? It's dark, cold, everyone is broke and it drags on for years. Even those born in January are annoyed because no-one can celebrate with them. So glad it's over! I started 2019 with visuals from Chocolate City Comics. Isn't the Osaki Training School beautiful? Found out some months afterwards that the company is ran by a scam artist who I had to sue BUT the artwork is lovely! Silver lining and all that. I am about five chapters away from the end of Emily Knight 3. I have no idea why it is taking me so long to do but it is driving me slightly insane. I hate when you know how close you are to the end but yet you are not at the end!!  I went to Waterstones and saw my book on the shelf and one of the staff asked me to sign it. I was so cool but inside I was like AAAAHHH!!  We ran our first event for The Author School and did a #Bookstagram cla
Post a comment
Read more

...but she's offended because I have BLM on my header?

July 31, 2020
Where is the year going? I know 2020 is on a maaaaaaad one but it literally is my birthday next week and I'm just like huh? Weren't we just put in lockdown? It feels weird celebrating a birthday in these circumstances. I'm the Queen of just being extra around this time but I just feel like blah. The world is so weird right now. I am currently sitting on my laptop, sweating like a crazy girl (it's 32 degrees) and trying to finish work so I can watch Black is King.  I have been BUSY. Now I'm always busy but this has been on another scale. Literally drowning in work. I'm so pleased that The Diverse Book Awards longlist is done!!!! I can't even believe we found the time to read all those books. Oh the relief is just on another level. It was a tough week getting everything together so we can drop the longlist today. Then a publisher had to pull out one of the kids books but the press release had already gone out. Le stress! The reactions to the longlist has been
Post a comment
Read more